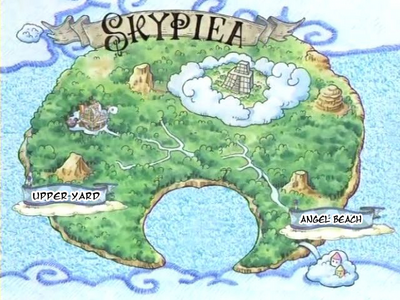 Skypiea is an island located in the sky above Paradise. It is the sixth island visited by the Straw Hat Pirates on the Grand Line.
The people in there have small wings on their backs, similar to the stereotypical angel which make them really unique, though no use has been revealed for them thus far. The daily life of sky people revolves around the use of Dials, which normally are not available in the Blue Sea. As opposed to the

of the rest of the world, it uses

as currency. The people of Skypiea have a religious reverence for soil, because it can yield plant life much better than island cloud can, and also other materials that come from the Blue Sea. Most of the people from the Blue Sea believe that Skypiea is merely a myth.
The inhabitants of this haven 10,000 meters above the ground are a kind, trusting folk naturally, although through the years the war with Shandia, the thievery of blue-sea dwellers and the harsh rule of gods has jaded them, leaving them with a bitter taste towards outsiders in general. This isolationism is in stark contrast to Fishman Island, 10,000 meters below the waves, who, while sharing the traits of kindness, had become largely swamped with outsiders.

A
U
Retrieved from "https://onepiecetreasurecruiseglobal.fandom.com/wiki/Category:Skypiea?oldid=64309"
Community content is available under CC-BY-SA unless otherwise noted.